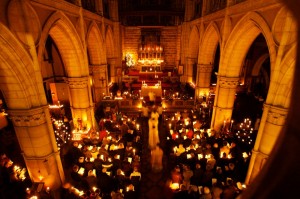 The interior featured a series of clerestory windows facing south, a stone arch in the chancel and a row of stone columns with foliated decoration (carved with leaf ornamentations).  The Pre-Raphaelite Brotherhood, a group of people active in various areas of the arts who were influenced by the Quattrocento period of Italian art, were closely involved with the decoration of the interior.  Bodley was informally associated with this recently formed group, in particular with Edward Burne-Jones and William Morris, a long-term friend.  William Morris himself, along with Philip Webb 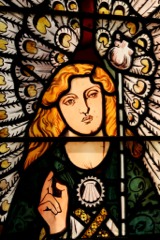 and Charles Faulkner, was responsible for the painting of the chancel roof.  The large windows on the western face of the church were made and installed by Morris, Marshall, Faulkner & Co., the predecessor of Morris’s firm Morris & Co.  There are many stained glass windows by Morris and Burne-Jones in the old building.  The east end of Burges’ building features a large trio of stepped lancets with basic two-light tracery.  Internal fixtures include a grey marble font and a green serpentine and calcite (verde antique) pulpit, both designed and made by Bodley.  The noted stained glass designer Charles Eamer Kempe was responsible for the restoration and installation of a 16th century reredos of Flemish origin.  This depicts three scenes from Christ’s life in the form of a triptych which sadly has been removed due to awaiting restoration.  St Raphael by William Morris,1862. 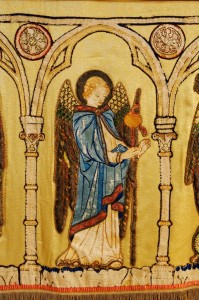 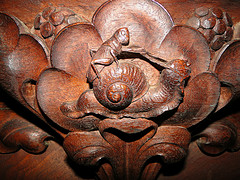 The church also boasts a collection of antique ecclesiastical vestments, some remarkable wood carvings and William Burges remarkable Beanlands Chalice described by David Beevers in the August 2014 edition of the Flyer.