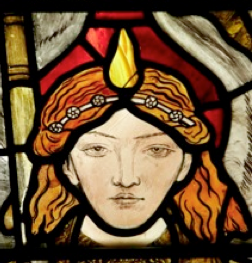 It was some years ago that our Patron Sir Roy Strong gave the Friend’s Annual Lecture.  From the pulpit he urged all churches to ‘throw out the pews’ and be much more open to other activities as well as worship, to become the hub of the community as they were in the Middle Ages.  The Friends of Saint Michael’s contribute to the care of the Church’s fabric, fixtures and fittings and promote the use of the building for cultural and community events.   Many of you will already know the inside of the church from concerts, lectures, parties, visits, rather than from the daily worship that goes on here.

In 2010 the Friends was relaunched, with more members and greater funds.
This web site introduces the church’s history and art treasures; lists upcoming events and maintains a record of past events.

Known as the “cathedral of the back streets”, Saint Michael and All Angels is famous for its magnificent stained-glass windows;  in the south aisle by the Pre-Raphaelites, William Morris, Edward Burne-Jones, Ford Madox-Brown, Dante Gabriel Rossetti and Philip Webb, and in the north aisle by Kempe & Tower.
Simon Jenkins, ‘England’s Thousand Best Churches’, placed it within the foremost one hundred.

‘One of England’s grandest Victorian churches’ and owing to its internationally-famed stained glass, ‘A Pre-Raphaelite jewel.’ – Sir Roy Strong