History of the Church

Plans for the church were drawn up in 1858, and construction took place between 1860 and 1861 to a design by George Frederick Bodley (whose father had been a doctor in Brighton and a resident of the Furze Hill area of Hove, close to the Montpelier and Clifton Hill districts). Bodley was also working on St. Paul’s Church in West Street, Brighton at the time, on an interior alterations project.

The design of the exterior was reminiscent of the Italianate style, in red brick with horizontal bands of white stone and a steeply pitched slate roof. This featured a modest flèche spire containing a bell recovered from Sevastopol during the Crimean War (1854-1856). 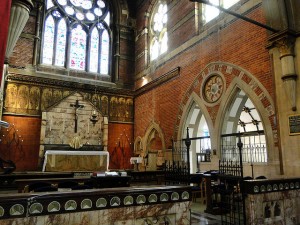 The church took two years to build at a cost of £6,728, and was consecrated by the Bishop of Chichester on 29 September 1862. There was room for a congregation of 700; pew rent was charged on 300 of these seats at first. The Reverend Charles Beanlands, who had been a curate at St. Paul’s Church since his ordination in 1849, was given the perpetual curacy of St. Michael’s Church, and he remained in this position until his death in 1898.

Saint Michael and All Angels serves the loosely-defined Montpelier and Clifton Hill areas of Brighton, which lie west of the major Dyke Road and cover the steep slopes between the Seven Dials district and the seafront.  A church named St. Stephen’s had served parts of the district since 1851, when it had been moved to Montpelier Place from its previous location in Castle Square, close to the Royal Pavilion, where is served as the Royal Chapel.  However, it was not convenient for the area as a whole, with most of its parishioners being drawn instead from the streets to the south of the church.

Development of the Montpelier and Clifton Hill areas started in the 1820s, and by the 1840s they had essentially taken the form they remain in today, with a range of high-quality houses, many in the form of Regency terraces and crescents such as Clifton Terrace and Montpelier Crescent.  However, one area of open land remained: at the time (the 1850s) it was known as Temple Fields, and consisted of a field, a pond and a partly-built house. This was chosen as the site for a new church to serve the area. On present-day maps, Temple Fields is the area bounded by Denmark Terrace, Clifton Hill, Powis Road and Victoria Road. 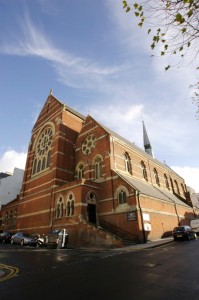 However, this fine building quickly became too small and, in 1865, William Burges designed a parallel church which would incorporate Bodley’s building as its south aisle.  The rebuilding was not carried out until 1893, and took two years. Burges was a contemporary of Bodley; both men were born in 1827.  It is not known for certain why a different architect was chosen for the redesign, and the changes reportedly caused Bodley some upset. Burges did not live to see his designs realised; he died in 1881.

The exterior decoration of the new building broadly matched that of the original church, consisting of bands of white stone contrasting with dark red brick, but there is a considerable difference in height.  The original building’s north aisle was demolished, and its remaining structure became the south aisle of the new church.  In terms of the church’s present arrangement, therefore, the main body and the adjacent north aisle date from 1893, while the south aisle is original. 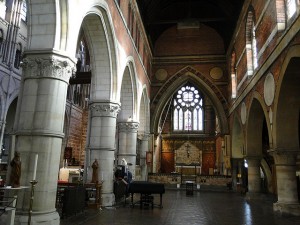 The designs, as originally submitted, showed that a cloister and a campanile were planned to be built as well.  Inside, additional decoration was to have been made in the chancel, and various additions were proposed for the sanctuary area. A predella (altar shelf) behind the altar, a set of sedilia within the sanctuary area and a baldacchino above the altar were all shown in the plans. However, none of these proposals were implemented, and no changes took place in this area until around 1900, when architect and interior designer William Henry Romaine Walker (1854-1940) provided a marble wall with Cosmatesque-style decoration between the chancel and the nave, a screen for the chancel itself, a new marble altar (in his wife’s memory) and extra marble ornamentation for the sanctuary. A rood screen and new reredos were also installed at this time, designed by Romaine Walker. 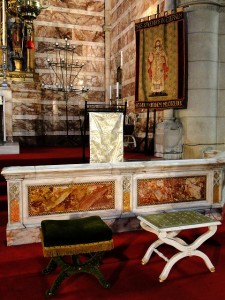 A Parish Hall was built in 1970 on the site, to the north of the church, where the cloister was originally proposed.
Today, the parish church of Saint Michael’s is recognised as one of the finest Victorian churches in the country, grade 1 listed and internationally famous for its magnificent Pre-Raphaelite stained glass.